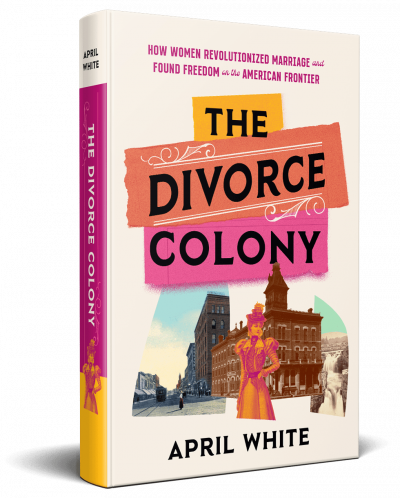 Dracut native April White is returning to the Merrimack Valley to launch her new book, The Divorce Colony: How Women Revolutionized Marriage and Found Freedom on the American Frontier.

At the turn of the century, “going to Sioux Falls” was a euphemism for “getting a divorce.” South Dakota’s permissive divorce laws made the small frontier city a magnet for socialites and celebrities seeking to end their marriages. It was, the newspapers breathlessly reported, “a Mecca for the mismated” where “the ‘electrocution’ of marriage” was underway.

At the center of this story are the countless women who traveled thousands of miles in search of their freedom, an escape law and society conspired to deny them at home. For each, divorce was an act of personal empowerment and self-determination. But at a time when women were denied a voice in public life, their collective actions forced the issue into the national conversation, into the country’s churches, its courts, its legislatures, and its pinnacle of power: the White House.